What is the Wedding Season and Does it Ever End? 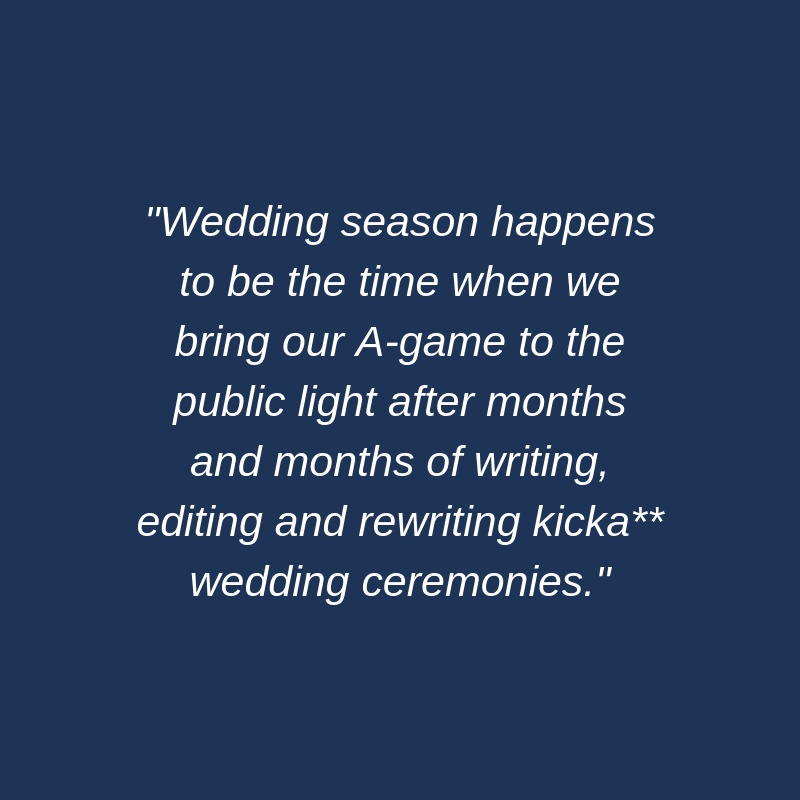 Anyone who knows me (Liz) knows that I’m constantly talking about this mysterious “wedding season.” I plan for it year-round, remind my friends when I’m in the middle of wedding season, take more naps and sleep less full nights in the height of it.

So what the heck actually is wedding season?

For wedding vendors, the wedding season typically arrives from the Spring to Fall months or whatever is the warmest months of the year. For us in the midwest, our wedding season usually happens from April to the end of October. During these months, we are at a minimum of one wedding per weekend but we average around three to four every weekend. In addition to officiating weddings, we conduct rehearsals, meet family and friends while attending rehearsal dinners, grab coffee or dinner with couples, and every other wedding activity in between. We travel from city to state to city and back to the same state again.

Even though wedding season winds down at the end of October, our work is far from over. Just like athletes train insanely in the offseason to prepare for pushing themselves through their main season, we do the same. We begin to plan out our marketing for the next year, book any vacations we need for the next few years, finally see our family and friends again, and strategize everything. I personally take a week or two off from weddings at the beginning of November to basically sleep for two weeks, catching up on the sleep I didn’t get over the span of the wedding season.

And then arrives engagement season.

What?! Another season besides the wedding season?

Yup. A wedding business has not one, but two major seasons — wedding season and engagement season. During November to the end of February, we book nearly all of our weddings for the following year and a half. The timing of this has adjusted over the years as our business has grown. I’ve recently seen an upwards trend of couples booking us in the middle of summer around the July month. Though we receive the most amount of requests for weddings during those three winter months, and we book weddings anywhere from one month to two years out.

We receive many requests during November to February because a majority of couples become engaged during or near a holiday. And what could honestly be better than proposing to a loved one with family and friends present? Before January 1st of every year, I mentally prepare myself, knowing my inbox will become flooded with emails from couples inquiring about their weddings.

Following January 1st, we then average at least one to three inquiries per day about weddings and meet with couples at least once per week. When we aren’t meeting with couples, we’re writing up a storm of ceremonies we have already booked, brainstorming ideas with couples, and finding inspiration for weddings through our everyday lives.

So, does the wedding season ever freakin’ end?

Honestly? No. Of course there are the summer and fall months when we are physically at weddings, but a majority of our work happens during the rest of the months outside of this mystical ‘wedding season.’ Wedding season happens to be the time when we bring our A-game to the public light after months and months of writing, editing and rewriting kicka** wedding ceremonies.

It’s a ton of work year-round, especially during the Summer and Fall, and there’s this strange, conflicting feeling of being sad when wedding season is over yet the excitement to begin meeting new couples during engagement season. It’s similar to the buildup for any holiday season where there are months of advertisements and preparation, excitement when the holiday finally arrives, but contentment when it is over, knowing that there is just another holiday to prepare for around the corner. And even though the wedding season does slow down every year, we never leave behind the memories of the couples we’ve shared our happiest moments with.